A Brief Guide to Croquet

Croquet, as it is known today, is likely about 150 years old. Historical sources, of course, show a variety of predecessors all over Europe that date back to the early 18th century. Invented by the British, it became a favorite summer pastime both in Europe and in the United States. Today, the game is played in a variety of versions, from leisurely spending time on a Saturday afternoon in your friend’s backyard to competitive tournaments in one of the many Croquet clubs across the nation. 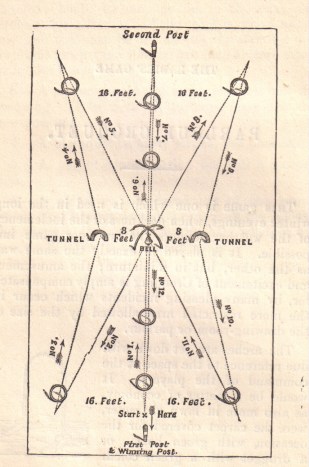 Six-wicket croquet (or garden croquet) is the most prominent version internationally. It requires a well-maintained lawn, similar to a golf course’s green. The wickets, or hoops as the British call them, are arranged in two triangles on opposite sides of the stake, which our friends in the UK call peg. The standard rectangular croquet measures 35 yards by 28 yards in the United States and 21 meters by 14 meters in Europe.

The ball has to be played through the wickets in a whirling motion, ultimately hitting the stake in the middle of the field.  While players take turns in hitting their balls with their mallets (US) or strikers (UK), contenders also have the chance to win extra shots. For example, in British croquet, a player earns two extra shot when the player’s striker’s ball hits a competitor’s ball. A complete set of British croquet rules can be found here, an American version can be accessed here.

Besides six-wicket croquet, variations like golf croquet or nine-wicket croquet became increasingly popular and can often be found as valid alternatives to the more traditional garden croquet.

For a gentleman, it goes without saying that every activity requires the right attire. Croquet rules, especially for American Croquet under the United States Croquet Association, expect players to wear all white apparel. Similarly to such sports as golf or tennis, croquet rules attach great importance to its behavioral code as integral part of the rulebook.

While everyone at the Gentleman’s Digest highly encourages croquet players to adhere to the strict rules, we would still support a somewhat loser application of the dress code. What would be a better opportunity to wear your new seer sucker suit or the wonderfully light linen pants you rarely wore last summer? After all, it is (almost) scientifically proven that a Mint Julep tastes a lot better when sporting a light beige poplin suit… Enjoy! 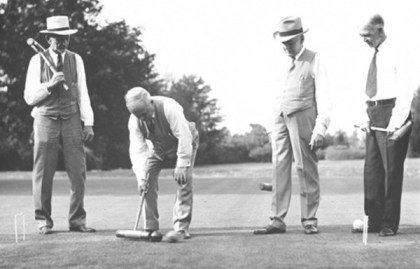 Lastly, we have an entertaining alternative rule book created by the brilliant folks at drinkingcroquet.com that you should take care to read….

2 thoughts on “A Brief Guide to Croquet”