The name mojito most likely comes from the lime-based seasoning prevalent in the Caribbeans, and of course on Cuba, the birthplace of the mojito. As so often, the origins of this cocktail are subject to debates. However, it is likely that the mojito developed from a drink called “El Draque”, named after Sir Francis Drake around the 1580s. The original El Draque was an aguardiente based cocktail created to fight widespread sicknesses among seafarers. The Mojito, as we know it today, is a refined version of this original remedy. 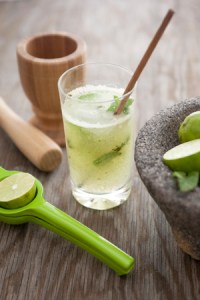 Muddle sugar, mint leaves, and lime juice in a highball glass until the sugar is completely dissolved. Add the rum, fill the glass with ice and top it off with the club soda. Add mint sprig for garnish.

Bemelmans Bar in New York’s Carlyle Hotel created a champagne version of the Mojito, called the “Old Cuban”: Instead of club soda, the drink is made with Champagne and instead of sugar, syrup is used. The steps: Put 2 parts of light rum, 1 part of lime juice, a dash of Angostura bitter, 1 part of simple syrup, 6 or 7 mint leaves, and ice in shaker and shake well. Strain into a chilled champagne flute and slowly top off with champagne. Stir very gentle and garnish with half a vanilla bean or a mint sprig.

Back to Classic Cocktails