Robin and the Seven Hoods

“You’ve either got, or you haven’t got, style.”

Released in 1964, Robin and the Seven Hoods showcased style, class, and music that any Gentleman should play often and keep close to his heart.  Introducing classic numbers like “My Kind of Town” and “Style”, the film hit Hollywood with a “Bang Bang”.  Pay attention to what these classy cats wore, as they didn’t just write a catchy tune.  They were dressed for each occasion like men should be. 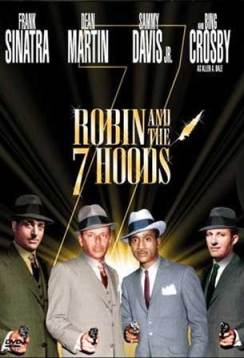 The rat pack is gunning to stay on top as the ruling gang in Chicago.  “Robin Hood of the Windy City” (Sinatra) leads as the admirable city philanthropist, and meanwhile manages to keep his underground enterprises running simultaneously.  (eg. turning a booming casino into a spirit-filled church in a matter of minutes to evade the local coppers…)  Thanks to his lively cronies, and a comedic musical line-up, the boys manage to evade danger at every corner they can.

This is a prize-winning tribute to the style of the late, roaring twenties.  If you haven’t added this essential item to your film collection, do it right now.  You won’t regret it.

In the meantime, enjoy: