Wassail was originally a drink used in festivities to scare away evil spirits, lingering in trees and hindering their growth. In modern days, it is – just like its German counterpart – mostly associated with the holiday season. Wassail was originally cider-based (English cider, not American PG-13 stuff…), but has seen more wine-based variations popping up in more recent times. 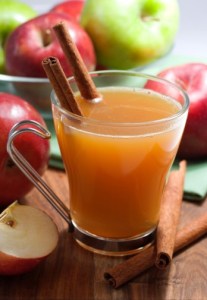 Put apple juice, cranberry juice, and brown sugar in a covered slow cooker. Put 12 of the cloves, the allspice, and the cinnamon sticks into cheesecloth and tie with kitchen twine to make a spice-bag. Add to the slow cooker and cook on low heat for 5 hours. While cooking, heat the oven to 375°F (in Celsius: 190-200°). Spike each apple with three cloves and place in a small baking pan, add the water. Bake apples on rack in the middle for about 45 minutes, until they are tender when poked with stick/knife. Remove from oven and set aside.

After juices have cooked for 5 hours, add apples and wide strips of orange peel. Remove the spice bag and stir in the Calvados. Serve in pre-warmed cups.  (We recommend cooking initially with a small portion of Calvados already added, then pour the rest later)

Variation: More Calvados, or if you must, Apple Jack

Back to Winter Warmers

*Photo by ourstate.com (Thank you to North Carolina for the apple bounty)

One thought on “English Wassail”