A Gentleman Buys a Watch

To Catch a Thief

Many movies tell the story about the remorseful thief that finds himself unjustly accused once again. To Catch A Thief, directed by the legendary Alfred Hitchcock, however, can be considered the father of them all. Loosely based on the 1952 novel by David Dodge, this 1955 romantic thriller was Grace Kelly’s last movie with Alfred Hitchcock, produced in the year before she became Princess of Monaco. It is widely considered to be one of Cary Grant’s best performances and won an Oscar for best cinematography (Robert Burks). 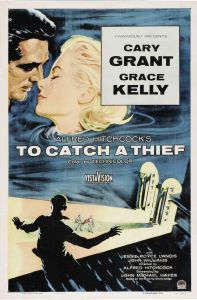 The French Riviera is the perfect retirement place for jewelry thief John Robie (Cary Grant). Unfortunately, his peace and privacy is at risk when robberies resembling his style occur along the blue waters of the Mediterranean Sea.  Narrowly escaping the police, Robie plans to catch the real thief in the act. In order to do so, he pretends to be an American industrialist and befriends Jessie Stevens (Jessie Royce Landis) and her daughter Francie (Grace Kelly). The wealthy Stevens own exclusive pieces of jewelry and are the perfect bait to lure in the thief…

Your mother probably told you that stealing won’t get you anywhere… Well, Cary Grant was able to retire in Southern France. And hang out with Grace Kelly. The only thing that’s even better easier than that is to marry a prince. Oh, wait… That’s what Grace Kelly did.

One thought on “To Catch a Thief”